The permanent exhibition, located in the former director’s residence in the historical prison ensemble at Brandenburg-Görden, covers the history of the Brandenburg prison from the Weimar Republic to the present day. The exhibition focuses primarily on the period of National Socialism and the GDR.

In the Nazi section the exhibition not only focuses on the persecution of political opponents of the dictatorship, but also on aspects of a criminal biology motivated by Social Darwinism and “racial hygiene” extermination policies, to which criminal prisoners also fell victim. This section also provides information on the over 2,000 executions conducted at this site by the Nazi justice system.

In the GDR part of the exhibition the focus is on political prisoners who were subjected to extremely harsh treatment in a repressive prison system from 1949 to 1989.

The catalogue includes nearly all of the texts and images from the exhibition, “Up there in Görden. Brandenburg Prison during National Socialism (1933–1945) and in the GDR (1949–1990)”. 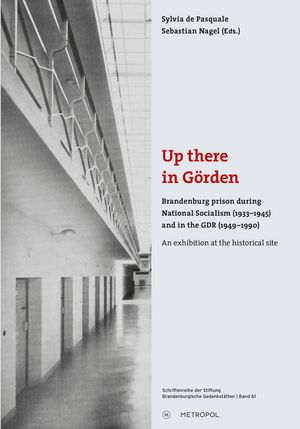